On 29 and 30 of October, the second edition of the Compounding World Expo took place at Essen’s Messe, in Germany, where the main actors of the compounding sector, over 200 exhibitors and an important number of attendees met. AIMPLAS, as a reference centre in compounding technologies, attended the event with a booth and shared the stage with other important companies such as Coperion, Maris, Polyone, Clariant, Leistritz, Brabender, Maag, Ampacet or Cabot, among many others. 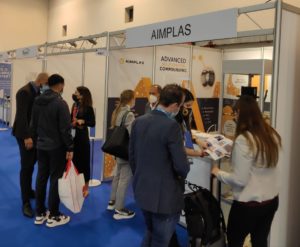 AIMPLAS services, in line with sustainability

AIMPLAS introduced its developments, which were very much welcomed, especially those related to sustainability as bioplastics (synthesis by reactive extrusion), biobased flame retardants or compounds reinforced with natural fibres. AIMPLAS also showed its new developments in Long-fibre Reinforced Thermoplastics (LRTP) and 3D printing with its high conductive filament FILI©. Regarding recycling, AIMPLAS presented its capacities as well in mechanical recycling and its certification portfolio where RECYCLASS or EURCERTPLAST schemes were highly requested. AIMPLAS’ chemical recycling services awakened a lot of interest too, especially the pyrolysis and solvolysis pilot plants.

Companies also showed great acceptance of the wide variety of compounding courses that AIMPLAS offers, such as courses on twin-screw extrusion, additives and fillers, PVC compounding, etc., as well as customised training for companies. 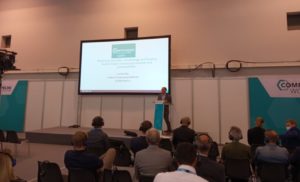 A presentation on compound viscosity and processability

In addition, AIMPLAS took a considerable active role in the informative part of the event with one widely accepted training presentation given by Luis Roca, Compounding Leader, with the title ‘Predicting how filler morphology and loading levels impact compound viscosity and processability’. More than 100 renowned speakers participated in these conferences.

The event meant the recovery in this second pandemic year and the will of companies to overcome these difficult days. The top topics of the event were the circular economy and the use of recycled materials, long-fibre reinforced plastics, bioplastics, reactive extrusion, 3D printing and flame retardancy.

As a result of this year’s success, the organisation of the Compounding World Expo is planning a new edition for 2023.